This summer, a new seasonal update has been installed on the game servers, and it offers plenty of interesting changes and novelties! One of the key new features of the new season is the revamped Ranked Matches system. Intrigued? Read on to learn more!

Ranked Matches is a mode that allows each user to challenge the strongest players, to prove themselves and demostrate their skills. The aim of the mode is to achieve as many victories as possible to end up among the best of the best.

The previous Ranked Matches system was outdated and in need of reworking. The players did not have much motivation to reach the highest leagues, the matchmaking was not always ideal – it was not uncommon for new players to compete against the experienced ones. This was most noticeable at the beginning of the season, where all players started from the same level (in the same league). Furthermore, experienced players lost interest in Ranked Matches as they reached the top league in the very first days of the season.

We are aware of all shortcomings of the old Ranked Matches and wanted to improve the state of affairs: to make the mode entertaining for the veterans with lots of gaming experience, as well as bring in the newbies, who are not as comfortable being matched up against players of a different level. 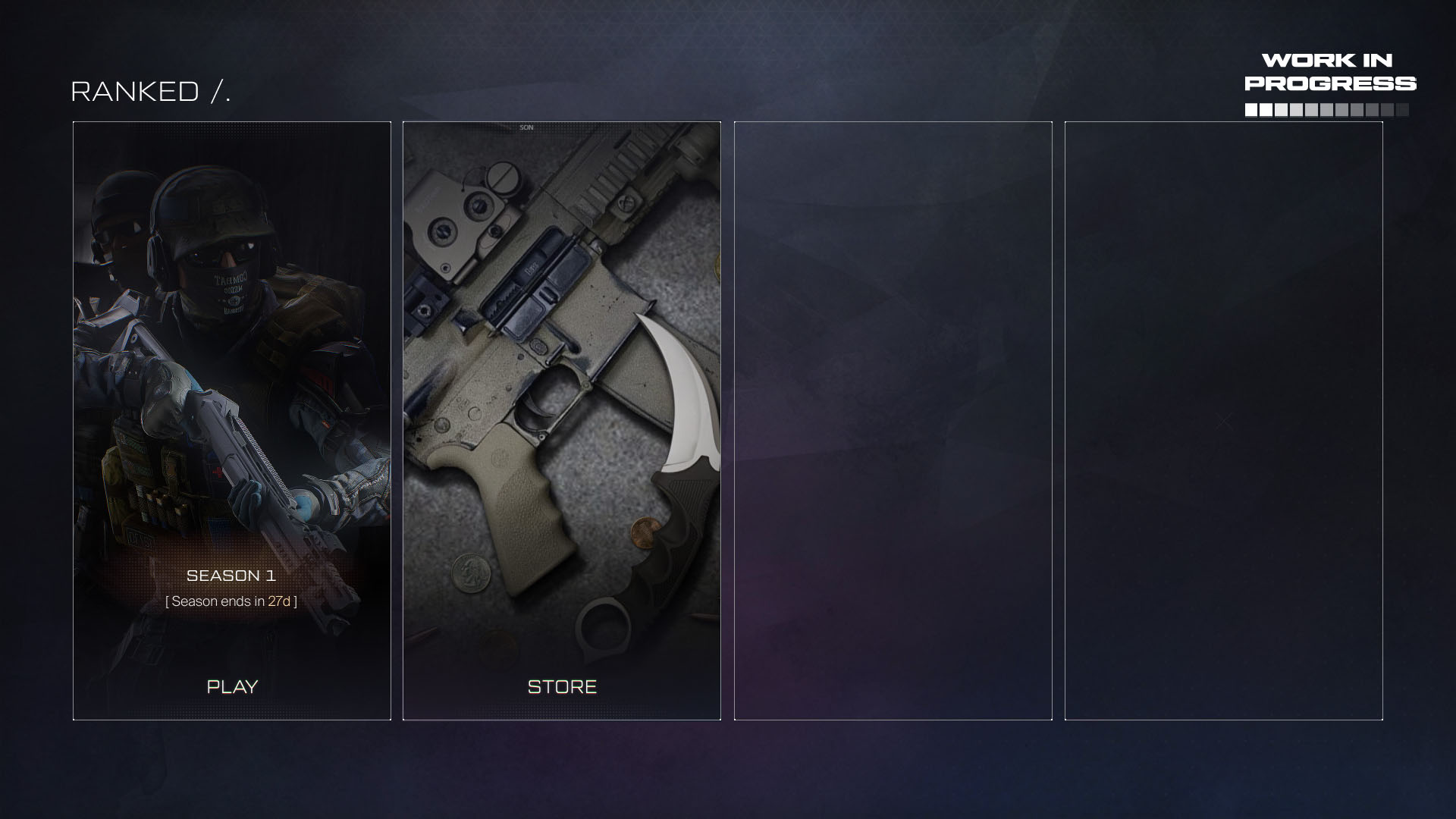 There are now only 7 leagues instead of 21 in the Ranked Matches progression. The first 5 leagues (Bronze, Silver, Gold, Platinum, and Diamond) consist of 4 divisions each. Next come the leagues for the strongest players – Master and Grandmaster. To enter a new league, you have to gather 400 Rating Points (RP) in your current league – 100 Points in each of the four divisions (except for the Master and the Grandmaster leagues). 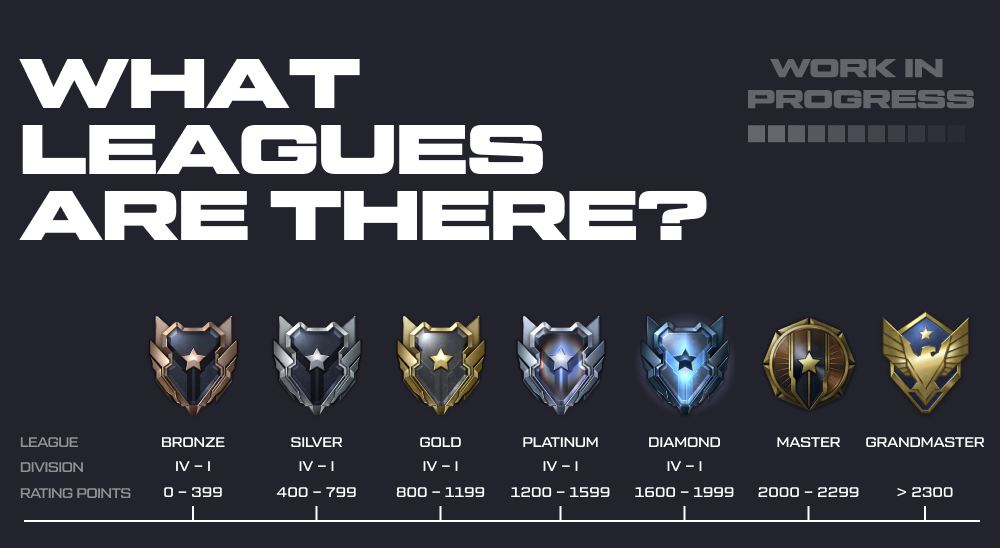 The Master and Grandmaster leagues have no divisions. In the Master league, you need to collect the required amount of RP to proceed to the top Grandmaster league. This league has no restriction on the maximum number of Rating Points. Anyone with a "balance" of over 2300 RP will be able to enter the league.

The leagues with no divisions have inactivity penalties – the player will lose 50 RP each day after a few days of not playing Ranked Matches. The penalty will be active until the player loses enough points to be rolled back to the Diamond league.

Additionally, every league has penalties for losing. That means that in case of a defeat you lose points instead of gaining them. Below, we will tell you more about how it works.

Advancing through Leagues and Divisions

Each new season for the player begins with a calibration. At the first launch of a reworked Ranked Matches season, everyone starts with the same number of points. In the following seasons, the number of points will depend on the league, in which the player ended up in the previous season.

For the calibration, the player needs to play 5 matches. Each victory will add 50 points and each loss will subtract the same amount. These points will determine the league and division in which the player will begin their Ranked Matches journey. Thus, if the player achieves the highest number of victories at the calibration stage, they will start from the Silver league, otherwise – from the Bronze one. 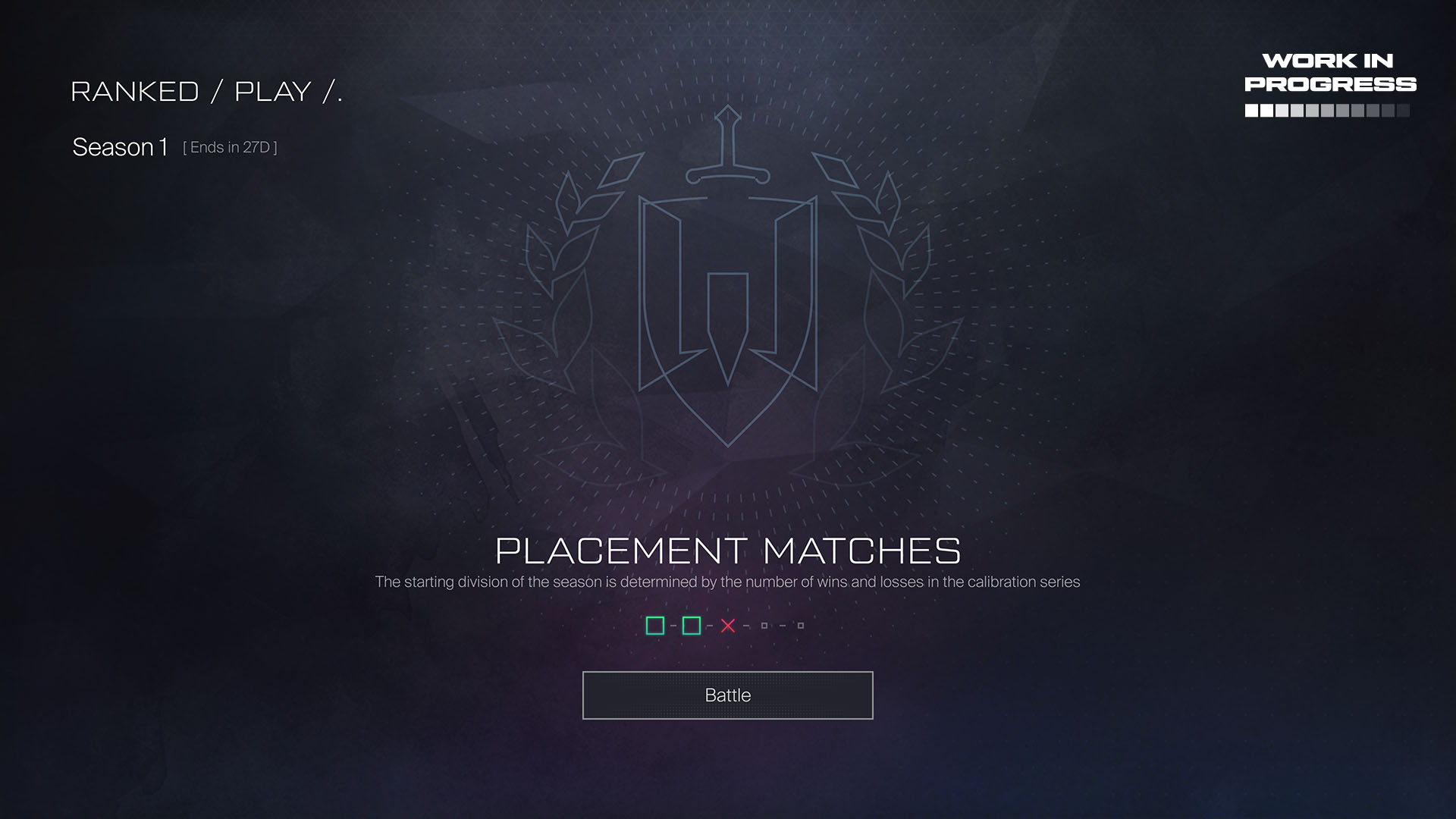 After going through the calibration process, it is time to conquer the top! To advance through each league (except for the Master and the Grandmaster ones), you have to gain 100 points in each division. Upon reaching the required amount for the next league, you have to prove your skill by winning 3 out of 5 matches. If you fail, don't worry, you will remain in the current league; however, the number of RPs you gathered will be slightly reduced, so you can quickly get back to the placement matches.

Example: you are in the last division of the Silver league; you have gathered 800 RPs but did not manage to achieve 3 victories to advance to the Gold league. In this case, you will remain in the Silver league’s top division but your RPs will be slightly diminished. To redo the advancement trial, you will need to gather 800 RPs once more. 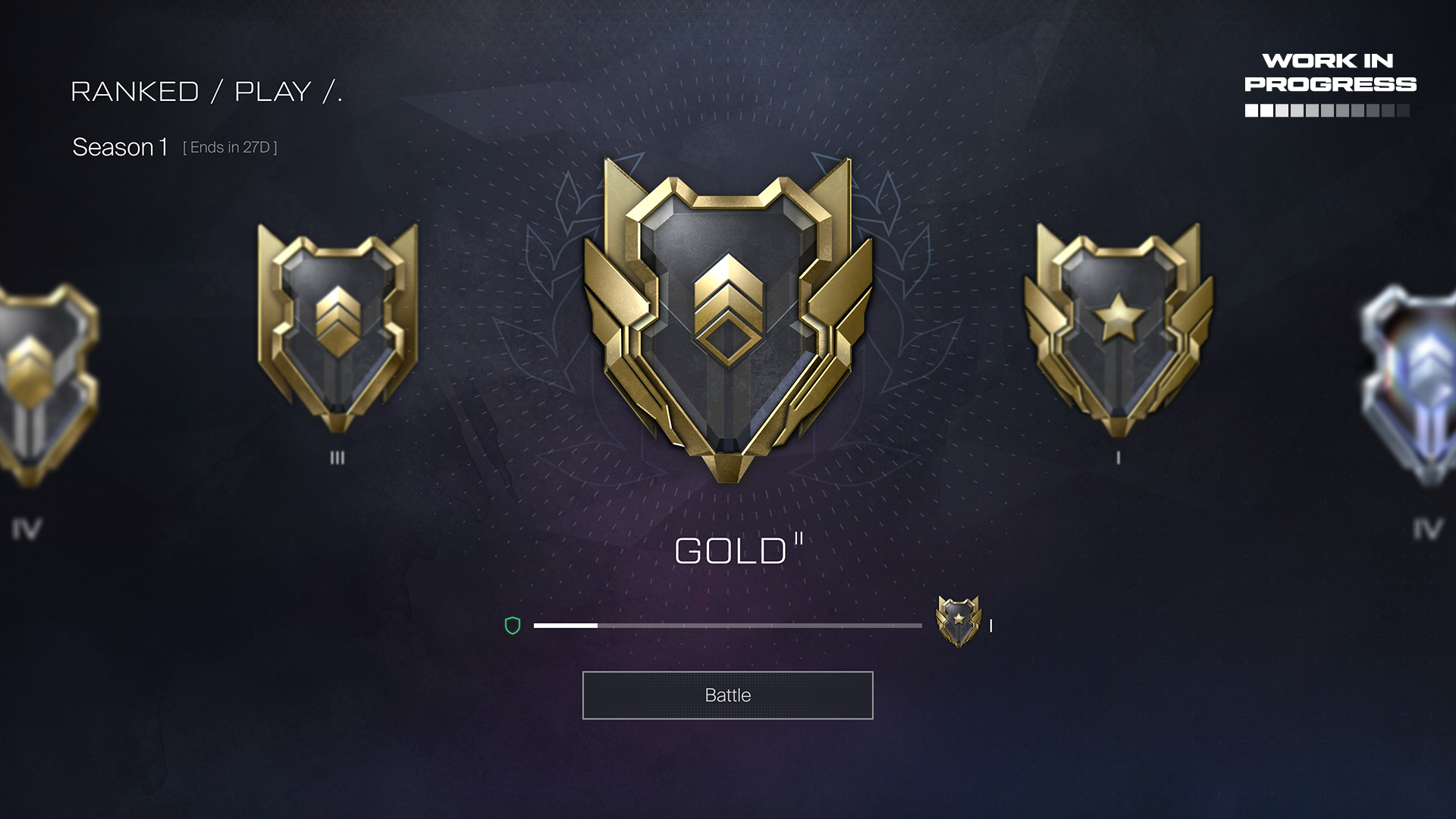 Advancing through the leagues gradually becomes more difficult. The penalty for defeat in the Bronze one is very low and victories bring more points. The next leagues give you less points for victories and have stricter loss penalties.

For experienced players there are also bonus points for their place within the team – depending on your place after the match, you gain extra points. The system is loyal towards players who did well in the match regardless of their team's loss or victory. Meaning that the top player of the the winning team will receive extra points, while the one in the defeated team will lose less.

To select players for a match, the system takes into account the number of Rating Points the player has. The players matched into a room fall into a 100-point difference range. For example, if a player with 2020 RPs starts searching for a match, the players selected to match him or her would have 1920-2120 RPs. If there are not enough such players, the system starts gradually expanding the searching field.

If the player has invited friends into the match, the team building will be based on the highest number of points among the stack members. For example, if the players with 1400, 1600 and 1700 RPs start searching for a game, they will be matched against players with 1600-1800 RPs.

On top of that, there is a limitation for the teams – if the difference in Rating Points within the team is over 800, they will not be able to start searching for a game together. The team leader will receive a notification, warning that the gap in the rating is too big.

Taking part in Ranked Matches is an exciting process that helps you improve your mastery, your teamwork, and your tactics. First and foremost, this mode is aimed at players who have something to show. You are in for not only cool and epic battles but also a tough journey to demonstrate that you are the best of the best. You will need to put in a lot of effort to achieve the best results. We are sure that you can do this, so show us – Who is the Grandmaster around here? Compared to the previous version of the system, the way up might be more difficult, but this challenge allows for a more balanced player distribution throughout the leagues.

For your successes in the Ranked Matches, you will receive a rating currency. It is earned both for victories and for advancing through the divisions and leagues. But bear it in mind that you can only acquire the currency when you get into a new league or a division for the first time.

The rating currency is given out each season.

Receiving rating currency and points for the match 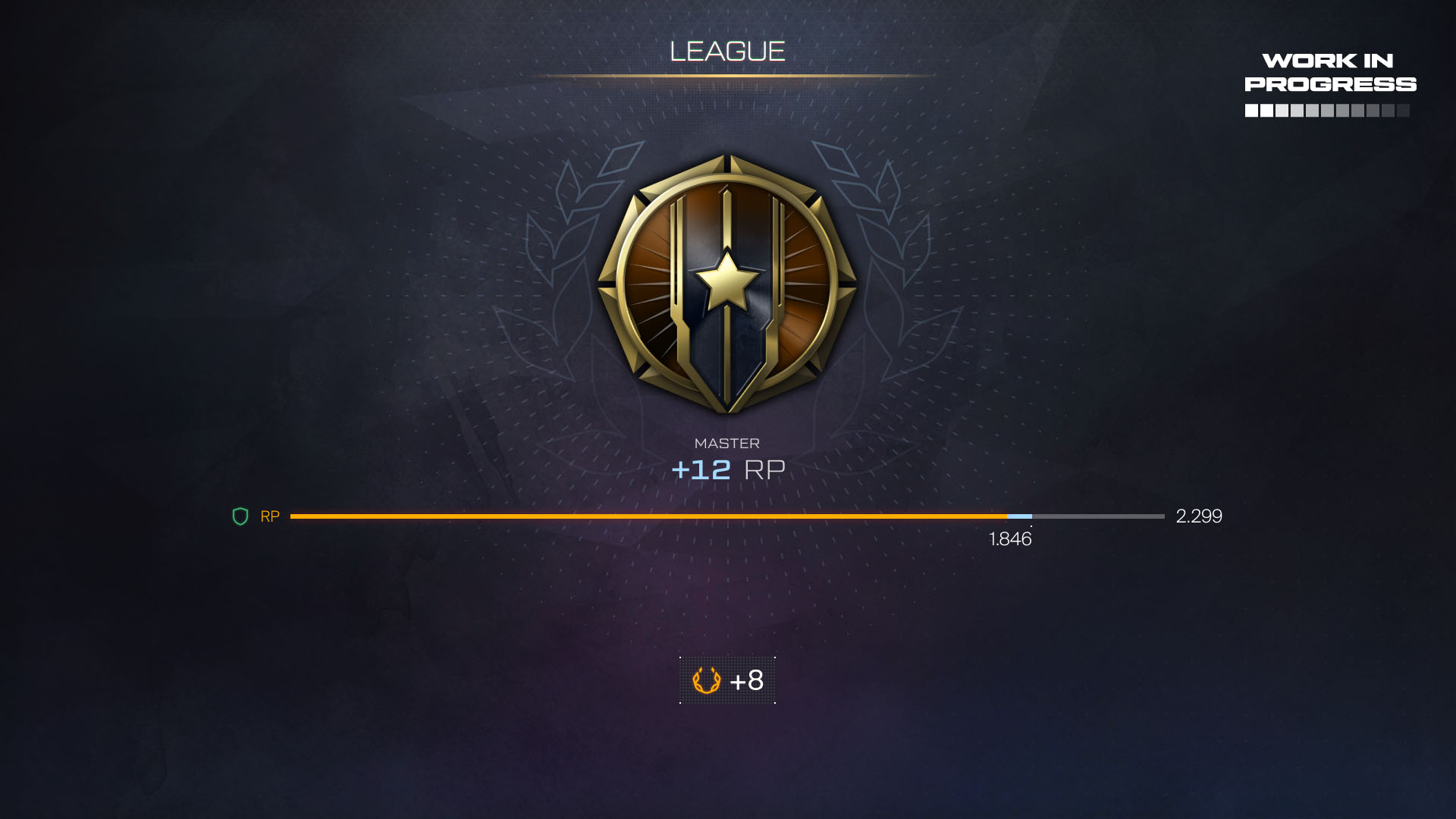 A separate store similar to the Event Shop was designed for the Ranked mode. In the Ranked Matches Store, using the currency you have acquired, you are able to obtain unique items that are solely available during Ranked Matches seasons. Among the items you can find:

The store line-up will be regularly updated after each large-scale update.

We plan to integrate the new Ranked Matches system in several stages. For example, a leaderboard will appeare in one of the updates. So you are able to see your own place as well as the list of the best players of the season.

We are paying close attention to your feedback, meaning that the system can be subject to change and will be continuously tweaked as we gather more information and run tests. Apart from that, we are preparing some other changes that are still work in progress.

Be sure to share your thoughts about the new feature in our social networks. This is a big and important update, so your feedback will really help us in our work. 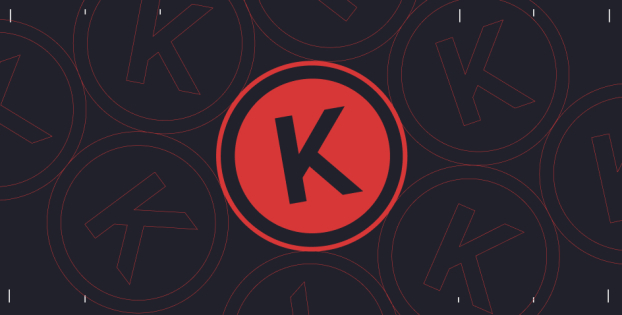 One million Kredits up for grabs
Don't miss out on another great opportunity to get an additional benefit! Just purchase Kredits — and get a 20% bonus. Read on to learn the details.
30 Jun 2022 offers 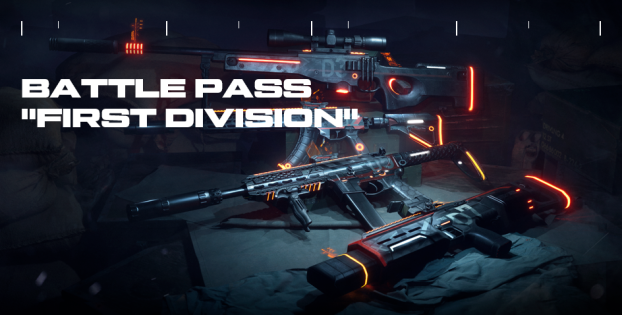 New Battle Pass already in game!
In this publication, we share details of the new Battle Pass "First Division". Be first to learn more.
30 Jun 2022 general