We have recently announced a big change in the game – a reworking of the Ranked Matches. You are actively discussing the news within the community and are asking a lot of questions, and this is awesome! We have been paying close attention to your feedback on the new system and forwarded it to the developers. Now, we are ready to answer the most frequent questions you have asked.

Q: Why is there a restriction on inviting a friend with a big rating gap? What if someone in the higher leagues decides to invite a newbie-friend into the game? The new players only get a small amount of points after the calibration and cannot play with fighters from the higher leagues.
A: This restriction is put into place to create a more equal playing field and to prevent weaker players from boosting their rating by playing together with experienced fighters. The rest of the game modes do not have this restriction and, thus, it is possible to invite a friend for a regular match.

Q: Is it possible to create a matchmaking system that allows solo players to play against solo players, and stacks vs stacks? Like, a squad of 3 and 2 players against a similarly composed one.
A: We were considering this option but we think it might lead to longer waiting times. In the future, such a separation might be added into the Ranked mode.

Q: I am afraid that in the very first days, cheaters will advance to top leagues and divisions together with ordinary players and interefere with the game. Will there be any kind of protection against this?
A: We are constantly fighting against cheaters in the game; currently, some improvements to the MRAC system are being tested. The tweaks will help combat dishonest players more effectively.

Q: Will there be more limitations on the access to the Ranked Matches based on hours spent in battles? This could reduce the number of cheaters in RM since they would not be able to quickly level up in PvE and spoil the game for others.
A: We plan to rework the amount of experience gained for completing Special Operations to rule out the possibility of quickly getting high ranks. The estimated time to reach a rank necessary to access RM will be no less than 10 hours.

Q: Do you plan to balance RM 3.0 via unified equipment? Would it be possible, for example, to add a mode with old vendor guns and equipment?
A: Such a separation of matchmaking queues will negatively impact the match searching times.

Q: Is it possible to implement the system of "banning" maps (or selecting only a few ones)? For example, to remove 3 maps I do not want to play from the search or, conversely, to look for only a selected few?
A: Currently, there is no such possibility, but it might be added later. Follow the updates!

Q: Will the amount of points be only determined by the K/D ratio or are there other variables taken into account? How will the Rating points be counted for Medics? A Medic can really impact the gameplay without making many kills.
A: The current system does not take into account the number of kills and deaths, but points earned. Thus, different actions throughout the match are encouraged (jump and slide kills, reviving, helping allies, planting and defusing bombs).

Q: What should I do if I have only gathered 11 stripes out of 12 for the first leagues? Will the cycle of 12 RM seasons be completed?
A: In the new Ranked system, the leagues are different from the ones in the old system and the old achievements for completing the season in a certain league will not work (but the players who have already obtained the stripes will still keep them). New achievements will be designed for the new system.

Q: How often will the seasons restart?
A: Every 3 months, there will be a new Ranked season with new rewards.

A: We will work on the issue while tweaking game mechanics.

If you still get questions, feel free to ask them in the comments. Stay tuned and have a nice game!

One million Kredits up for grabs
Don't miss out on another great opportunity to replenish your weapon arsenal! Purchase Kredits — and get a 30% bonus. Read on to learn the details.
08 Jun 2022 offers 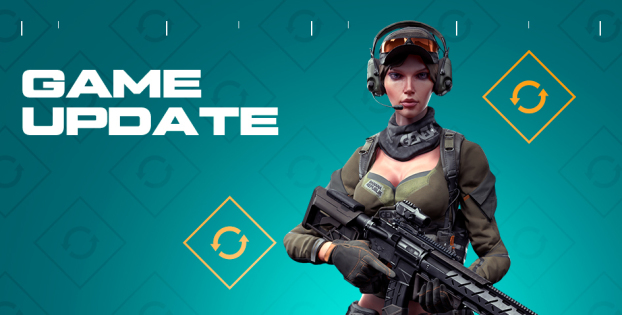 [UPD] Update - 08.06.2022
In this update we have improved the game security system and launched new contracts — complete missions and get cool rewards!
08 Jun 2022 patch_notes